Sweet peas! How about them? Last year I grew an unnamed white variety, this year I’m all out with not one, but two: a deep, dark plum coloured one called Windsor, and a creamy one touched with purple on the edges called Old Times.

Some say you should grow them in autumn, but I’m not trying that so close to the polar circle, where the icebears roam and minus seven degrees is called balmy. Instead, I tucked some in on the tenth of January. I sowed two batches of three seeds per 9 cm. pots, put them on the windowsil, and waited.

Up they sprouted a week later. Long and lanky, swaying in the nonexistent wind, craning their poor necks for a speck of sunlight, to the sky and beyond they shot. It all looked promising, when after a month one after the other, Old Times gave up the ghost. I cursed a bit (I had just fabricated a nice, twiggy framework for them to climb on), threw out the wilted speciments, and resowed Old Times. Windsor, for the time being, survived. Two out of three seeds had germinated, and now they were kind of just there, waiting. Two sets of leaves, legs beyond belief – the sweet pea equivalent of pouting, I think.

Windsor didn’t do much in the weeks that followed. Two sets of leaves, long and lanky – the tips started to wilt, so I pinched those out, but other than that, the plants stayed with me. Fast forward to the end of March, and they’re doing just fine. I sowed another batch two weeks ago – 2 pots of 3 Windsor seeds, 1 pot of 3 Old Times, and Windsor germinated just fine. No sign yet of Old Times, but there’s a batch of them from February that is looking dandy.

What can we learn from this? Is it worth sowing your sweet peas on a windowsill in January? Perhaps. I’m yet to see how they are to flower. January Windsor is preparing new shoots, as is February Old Times, whose leaves are smaller than Windsor’s. The March batches of Windsor are coming along fine, but I’m a bit disappointed by Old Times not germinating (that’s zero out of 3). I gambled sowing in January, and for half of the seedlings the gamble payed off. Sowing in February could be a bit safer; at least the light levels are better. Though the February ones (now we’re comparing different varities however) have the same amount of leaves as the March sown ones.

None of this is scientificyly sound, it’s just observations from the windowsil, and the balcony, where they al hang out during the day. It’s sunny, and I leave them out until after dark so they can start to harden off a little bit. We’re still getting frosts at night, so in the evenings I take them in. Am I fussing over them too much? Perhaps. I just want them all to make it – can’t wait for them to scramble onto a structure I have yet to fabricate, and to delight our nights and days with their fragrance!

There’s not much to see yet, so here’s a picture of a flower bucket containing some of last year’s sweet peas: 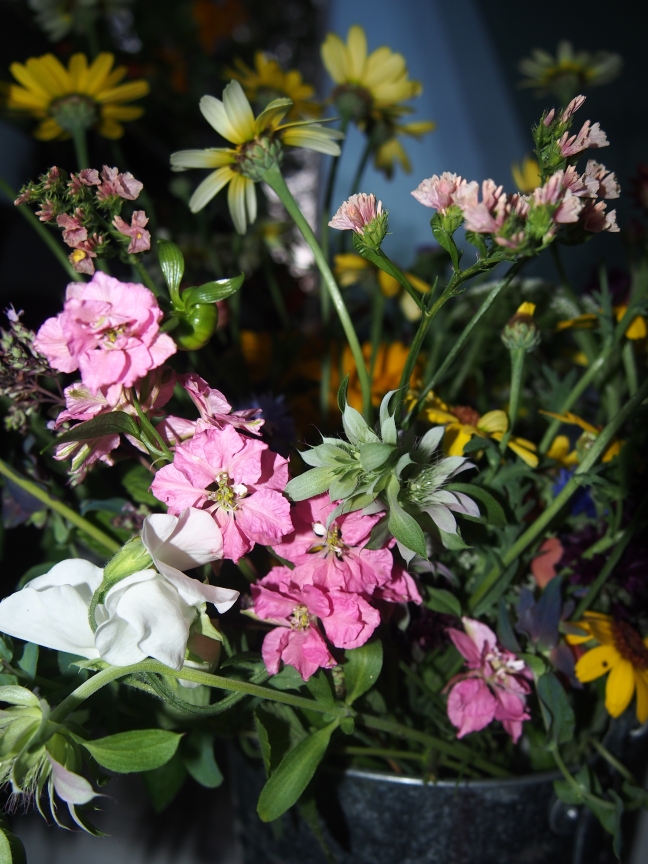