When looking for seeds, we’d like something showy; for the tiny little granule to turn into a whopper of a Strelitzia, for example. Often things don’t turn out the way we had hoped for. Diseases strike, the seedlings are feeble, the temperature is to hot, or too cold – things are going awry. The spectacular thing we were looking so forward to is now haunting us in our sleep.

A year ago, March 28 2019, I started off a batch of Chsysanthemum Segetum, eastern star. I had never grown them before, and left them out on the balcony to do their own thing. No need for extra cover, or heat, or more sunshine – all twelve of them grew on and on, until they needed a new pot. Which they got, and they kept on growing happily. By midsummer they were planted out and were showing signs of flower buds, and from then on they kept on flowering until well into October, way after we get our first frosts.

Shouldn’t that be what we all want in a plant? These cheerful yellow daisies are dead easy – never have I come across a plant easier to propagate. They may seem very ordinary and not much special, but seeing them now cheers me up, as they did last year. Nothing feels nicer than being able to graze plant after plant for their flowers, plonking them in a bucket, and carrying them home. The one and only plant not causing even a hint of a headache. 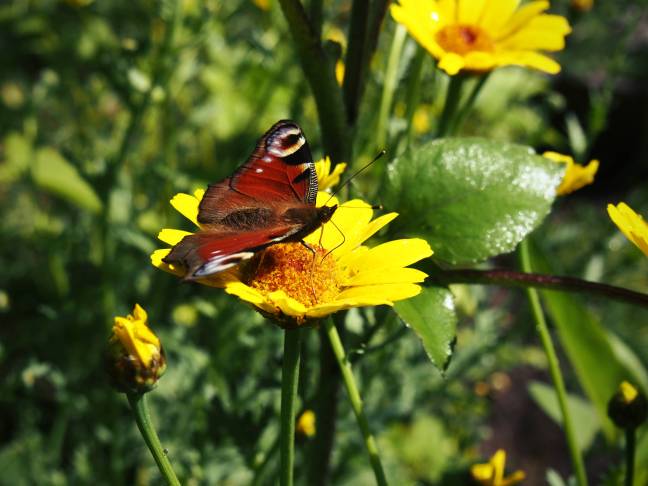 Today, just like last year, I noticed the seedlings, and greeted them as old friends. Just as last year, they’re growing up without fussing, without damping off or any added drama. A thousand yellow daisies. They make me sublimely happy.